Active Audio for The Bahrein Parliament

In this large-scale voting meeting room, acting as a Shura Council, ultimate speech intelligibility was necessary as well as performance and aesthetics in order to host local meetings, presentations and audio-video teleconferences.

To meet the Shura committee requirements, Venuetech and ACS selected two Active Audio StepArray 230+ to be located in the main hall, and four Active Audio RayOn 80+ for the side halls. The discreet and elegant design and the flawless intelligibility of those Active Audio’s speakers were the keys to a perfect sound reinforcement for such as venue.

Those column speakers were integrated in the Parliament alongside Televic’s uniCOS system, that includes high-profile meetings tools, as well as video walls from Samsung, a control system by AMX and cameras from Panasonic. 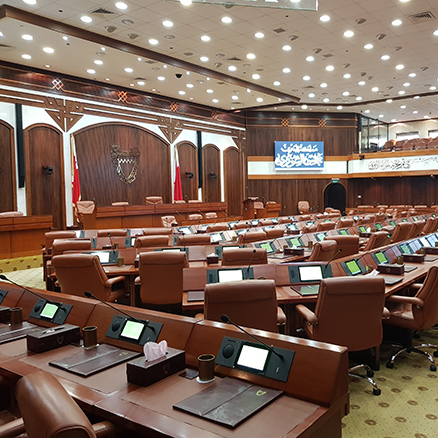 ↵ Back to the news